To study the current status of health and healthcare of tribal people in India and to give a roadmap for the future to tackle the issues, the Ministry of Health and Family Welfare (MoHFW) and the Ministry of Tribal Affairs (MoTA) jointly constituted the Expert Committee on Tribal Health under the chairmanship of Dr. Abhay Bang in October 2013. The committee constitutes of prominent academicians, civil society members and policymakers who have been working with tribal people from a long time. The committee after five years of thorough analysis produced a report which is probably the first comprehensive report on tribal health in India.
The report mainly focused on the following points:
· What is evidence and experience on the present state of health of tribal people and health care?
· What should be the principle and goals of tribal health care?
· How should be the healthcare delivery and human resource be organized in the tribal area?
· Recommendations for finance, governance and knowledge to reach the health goals
Socio-economic condition of Tribal people:
People belonging to Scheduled Tribes category are considered as Tribal people. The total tribal population in India is 10.5 crores (8.6%) which involves 705 different tribes. The population is distributed in 809 blocks across India. Madhya Pradesh has the highest number of tribal population (15 million) followed by Maharashtra (10 million), Odisha (9 million) and Rajasthan (9 million). The tribal population is scattered across large areas resulting in a low density of population. Socio-economic conditions of tribal people are poor compared to other category population. The statistics are shown in the following table: 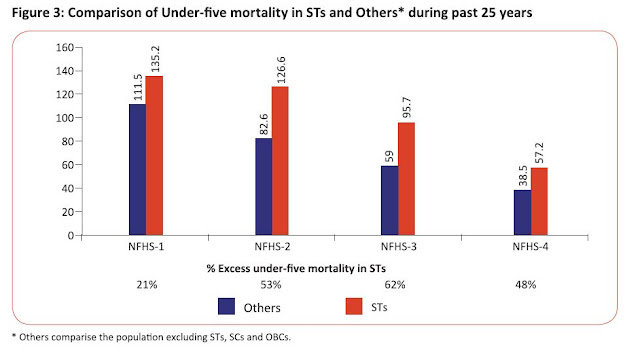 Governance and Finance:
For governance of tribal people, separate laws are created for protection such as Panchayat-Extension of Scheduled Areas (1996) to Gram Sabha empowerment and Forest Right Act (2006). Also, separate Ministry of Tribal Health (MoTA) is formulated in 1999. For the development of Scheduled Tribes, Tribal Sub Plan (TSP) was initiated under which it is mandatory to spend the funds from each ministry at least in proportion to the ST population. But, various ministries show the regular spending under TSP and there is no consolidated data available for the expenditure of TSP.
Health Condition of Tribal Population:
The problem of the lower health status of tribal people is global. The life expectancy estimated for ST is 63.9 years as against 67 years for the general population. NO estimates are available for maternal mortality. The ante natal care remains poor. The child mortality is also a major problem in tribal population which is decreasing with respect to time but still higher than the general population. The statistics are shown in the following table: 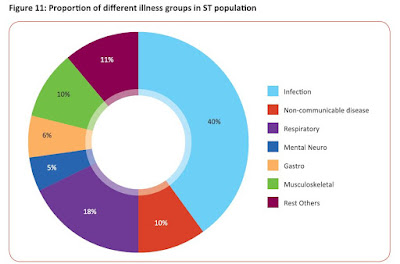 1. Hypertension: One out of four tribal adults suffer from hypertension and few people know their hypertensive status
· Genetic Disorder
1. Sickle cell diseases and thalassemia varies between 1-40% in different tribes
2. The prevalence of Glucose6Phosphate (G6P) dehydrogenase deficiency in 14 primitive tribes is around 0.7 to 15.6%.
· Nutrition
1. ST children are 1.5 times malnourished compared to others
2. About 30% of children and 70% men-women and 25% of pregnant and lactating women get food with adequate calories and proteins
· Mental Health and Addiction
1. 50% ST men consume to alcohol and 72% consume tobacco compared to the general population which is 30% and 56% respectively.
· Animal Attacks and accidents
1. As the tribal population lives in jungles, animal bites are common by snakes, scorpions and dogs
2. Prevalence of snake bite is highest in India which is around 50,000 annually (125 per day)
Health care seeking:
Tribal people heavily dependent on public Nearly 50 % outpatients visit made by tribal people are to public hospitals and the two-third tribal population is dependent on public hospitals for inpatient care. As per norms, HSC should present per 3,000, PHC per 20,000, CHC per 80,000 but in half of the states (total 18), the institutions are deficient by 27-40%. The human resources for healthcare provision have also deficit which is shown in the following figure: 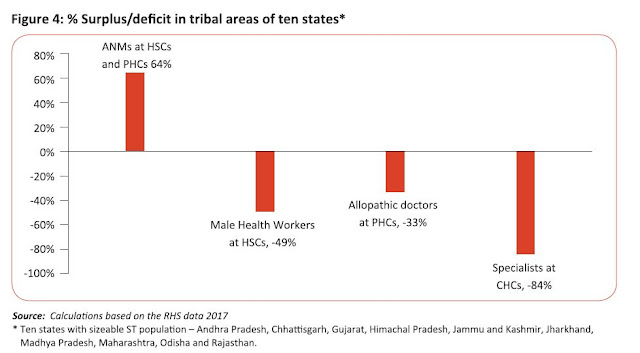 Planning and Financing:
In planning tribal health programmes, there is not population-level data available and also there is no inclusion of people from the community and due to which many interventions failed. For financing, tribal sub-plan was initiated but benefits are not reaching to people and there is no data of expenditure of TSP. Read more about Tribal Sub-plan:
1. https://www.rcdcindia.org/EvDocument/8fc76ff7db9ef9a-8c0a-4afb-b808-c04d66fc4bd4Concept%20note%20on%20TSP.pdf
2. http://planningcommission.gov.in/sectors/guide_state1208.pdf
To reach the goal to provide the health coverage to the tribal population to achieve the outcome indicators of health as per states average by 2027 the committee has provided some recommendation which will act as a roadmap to future to uplift the tribal health.
Recommendations:
· Focus on primary health care with the empowerment of ASHAs, Aarogya Mitras and Dais with an active participation of Gram Sabha and key community influencers.
· Financial protection through government medical insurance for secondary and tertiary care.
· Emphasis on health education in the community.
· School health program should be initiated for healthcare provision and health education in Ashram Schools.
· Provision of health care for tribal people living outside the scheduled areas through various medical schemes and social facilitators.
· Human resource for tribal health should be created through an expanded role of ASHAs, mid-level care providers, the creation of medical colleges in tribal districts and PM Tribal Health Fellows.
· Addressing special health problems in tribal areas like malaria, maternal and child health, malnutrition, addiction and sickle cell diseases.
· Research on tribal health traditions, regular data monitoring of tribal health and evaluating tribal health programs for efficient policy making.
· Creation of focused governance structure at all levels for tribal health with an active participation of the community.
· Ensure the financing of tribal health by:
o    Allocating 2.5% GDP to health
o    Strict adherence to tribal sub-plan
o    Provide health insurance to all tribal people
o    Tap into CSR funds
o    Cess on Extractive industries in tribal areas
o    Financial data collection and transparency
References:
1. Tribal Health in India, Report of Expert Committee in Tribal Health, Ministry of Health and Family Welfare and Ministry of Tribal Health
2. Website - http://tribalhealthreport.in/
3. Facebook page - https://www.facebook.com/TribalHealthIND/
4. Twitter - https://twitter.com/TribalHealthIND

Email ThisBlogThis!Share to TwitterShare to FacebookShare to Pinterest
Labels: विशेष