"Sapiens: A Brief History of Humankind" by Yuval Noah Harari

“There are no gods in the universe, no nations, no money, no human rights, no laws, and no justice outside the common imagination of human beings.”

The social and cultural traditions, within which we grow up, tend to become so deeply ingrained in our worldview that they seem to be a part of the natural order of things. In his fascinating and thought-provoking book, Yuval Noah Harari declares that all of these social and cultural traditions (everything we think and do beyond our biological drives) actually arise out of humankind’s unique ability to create ‘shared myths’. 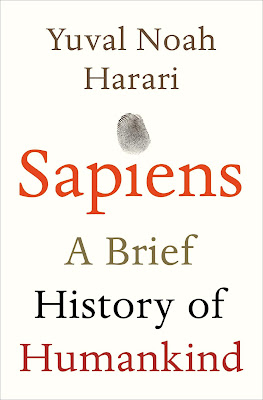 While tracing Homo Sapiens’ long history, Harari illustrates how this seemingly simple yet, remarkably powerful ability gave Homo sapiens not only a crucial advantage over other human species, but also explains “why Sapiens rule the world, whereas ants eat our leftovers and chimps are locked up in zoos and research laboratories.” He examines humankind’s development by dividing it into four parts:

Although Homo sapiens first appeared in East Africa some 200 thousand years ago, it was only seventy thousand years ago, according to Harari, that they developed the capability for language. It gave the Homo sapiens the ability to transmit large amounts of information about the physical world and social relationships, and to create social constructs or ‘imagined orders’. Harari refers to this transition as the Cognitive Revolution. Imagined orders enabled successful cooperation between strangers which in turn allowed the formation of large groups with rapidly evolving social structures. This gave Homo sapiens a critical advantage over the other, remaining species of humankind. However, the true impact of this revolution only became fully realized when the development of farming allowed the size of human communities to grow without bound.

While presenting several theories on the origins of the Agricultural Revolution, Harari focuses more on the disconcerting question of whether it was actually a good thing for humankind. Though we tend to believe that “the agricultural revolution was a great leap forward for humanity” he argues that it was perhaps “history’s biggest fraud” a “luxury trap” that humans unwittingly fell into. He notes for example that, at an individual level, foragers lived lives that involved doing less work than farmers. Being mobile and living from a wide variety of food sources also meant that foragers were at much less risk of starvation from bad weather or diseases than farmers, who were tied to their land and reliant on a few crops and livestock. Thus, he writes that, “we did not domesticate wheat; wheat domesticated us”.

However, for better or worse, the accelerated increase in population enabled by the Agricultural Revolution led to ever-growing settlements. In time, cities, kingdoms and empires, and eventually our modern world came into existence. Harari's review and analysis of this expansion makes evident the decisive role played in it by Homo sapiens’ ability to create imagined orders.  His detailed examination of various economic and cultural phenomena such as social hierarchies, money, empires and religions confirms the all-encompassing impact of this capability on our thinking and our lives.

In the final part of the book, on the Scientific Revolution, Harari demonstrates how some imagined orders can be more successful than others. He links the beginnings of the Scientific Revolution to the point, some 500 years ago, when humankind began to acknowledge its own ignorance. Observation and mathematics became central to improving our understanding, with a focus on turning scientific discoveries into technical advances. This revolution, according to Harari, occurred first in Western Europe and resulted in a “mentality of conquest” that set off a frenzied search for scientific discoveries and for new lands unknown to Europeans: “As time went by, the conquest of knowledge and the conquest of territory became ever more tightly intertwined.”. Harari argues that, this combination of interest in science and desire for conquest resulted in a decisive edge for nations in Western Europe. Further, their deep belief in progress and the future projected by the Scientific Revolution set the stage for the development of Capitalism. Harari goes on to examine a number of implications (Consumerism included) that the rise and dominance of the capitalist imagined order has had on modern society.

In the concluding chapter of the book, Harari looks to our future. He foresees humankind transforming beyond Homo sapiens, and describes a variety of technological scenarios that may allow us to change ourselves in fundamental ways. Ultimately, however, he seems to blanch at the power that is coming into the hands of humankind, even as we show ourselves to be ever more irresponsible and destructive.