“It is not wealth that stands in the way of liberation but the attachment to wealth; not the enjoyment of pleasurable things but the craving for them.”

The book ‘Small is beautiful’ is a collaboration of essays and speeches written over a number of years. The book is divided into four sections, focusing initially on the shortcomings of modern world economics and the irresponsible usage of resources, and later drawing ones attention towards the solution that can help improve these current problems. The author, E. F. Schumacher, has inarguably forced one’s intellect to direct towards facts that actually require a minds thought. Written back in the 1970s, this book holds relevant on its facts even today, like the errors of modern economics, the problems in production or the irrational usage of resources. I collected valuable insights from every chapter, based on facts and true examples, finding the perfect balance of wittiness and philosophy. 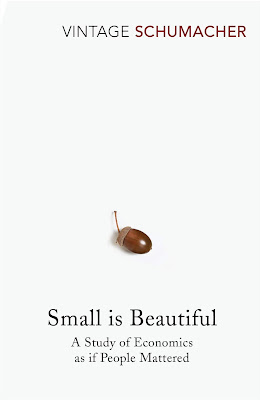 The point the author is trying to make is a very simple one. The way man is wasting natural energy and merely producing is an act of irresponsibility and individualism. The modern world needs to overcome the difficulties it is facing and strive towards peace and permanence. Unfortunately, money has become the most important value in today’s world, and it is assumed that everything has a price. But what man is forgetting, that the non-material values, like justice, harmony and health cannot be bought by money. They need to be inculcated in one’s culture. The continuous chaos is produced by human societies by achieving exponential economic growth, and quantifying success only based solely on the increased income of the nation. The society merely forgets to consider the environment is a source of ‘capital’ and not ‘income’.
Man is wasting a large sum of its energy for mass production of items we do not even need. The rich keep spending their resources to get richer, and that the poor have no room left for growth and eventually emerge poorer. The author has spoken of this in terms of two main problems in the society, mass unemployment and mass migration to the urban city. The concept of intermediate technology has been advocated. According to the author, neither the labor intensive nor the capital intensive mechanization approach is ideal, but a balance between the two is essential. Intermediate technology will be a solution to the problems of mass unemployment, dual economy and mass migration seen in developing countries.
Throwing light on Gandhian principles and Buddhism, this book puts forth a new concept called ‘Buddhist Economy’. Spiritual health and material usage need to be balanced and go hand in hand. From a Buddhist point of view, it is not consumption, but overall wellbeing through creative activity which should be one’s value. Employment shouldn’t be considered necessary as a source of income, when it is actually the source of purpose and livelihood. Non-violence and simplicity go hand in hand. Modern man is measuring his standard of living based on his annual consumption, while the Buddhist and Gandhian principles consider this approach as irrational. The aim should be achieving the maximum of well-being with the minimum of consumption.
I would highly recommend this book, which through repetitive examples and solid facts truly conveys its message loud and clear. It was an interesting read and there is a lot to imbibe from this book. Man is small, and small indeed is beautiful!