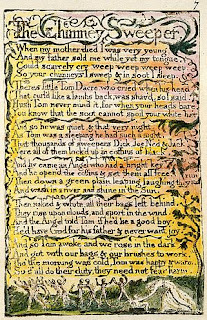 One of the greatest issues in William Blake's time, the late 18th century, was child labour. Kids as young as four were sold by their parents or were recruited from workhouses to work in mines, factories or to clean chimneys, due to their small size. A report to a parliamentary committee on the employment of child sweeps in 1817 noted that, "as the average size of a London chimney was only seven inches square, to encourage the sweeps to climb more quickly, pins were ‘forced into their feet’ by the boy climbing behind; lighted straw was applied for the same purpose. The sweep might be shut up in a chimney-flute for six hours and was expected to carry bags of soot weighing up to 30lbs (approx. 30kgs). Many suffered ‘deformity of the spine, legs and arms’ or contracted testicular cancer." The practice was not abolished until 1875, nearly 50 years after Blake’s death.
​            William Blake's poem "The Chimney Sweeper" (1789) (from his volume- Songs of Innocence) is set against this dark background of child labour that was prominent in England in the late 18th and 19th Century.
A young chimney sweeper recounts a dream had by one of his fellow chimney-sweeper, in which an angel rescues the boys from black coffins and takes them to a sunny meadow. Interestingly, in this poem Blake uses a child's innocent and naive view and demonstrates how it allows the societal abuse of child labour. It also displays Blake's acute sensibility to the realities of poverty and exploitation that accompanied the "dark satanic mills" of the Industrial Revolution.

There's little Tom Dacre, who cried when his head,
That curled like a lamb's back, was shaved: so I said,
"Hush, Tom! never mind it, for when your head's bare,
You know that the soot cannot spoil your white hair."

And so he was quiet; and that very night,
As Tom was a-sleeping, he had such a sight, -
That thousands of sweepers, Dick, Joe, Ned, and Jack,
Were all of them locked up in coffins of black.

And by came an angel who had a bright key,
And he opened the coffins and set them all free;
Then down a green plain leaping, laughing, they run,
And wash in a river, and shine in the sun.

Then naked and white, all their bags left behind,
They rise upon clouds and sport in the wind;
And the angel told Tom, if he'd be a good boy,
He'd have God for his father, and never want joy.

And so Tom awoke; and we rose in the dark,
And got with our bags and our brushes to work.
Though the morning was cold, Tom was happy and warm;
So if all do their duty they need not fear harm.
- William Blake

Question to the readers- Do you think the poem is relevant even today? How?

Email ThisBlogThis!Share to TwitterShare to FacebookShare to Pinterest
Labels: कविता